The Taylors arrive from England … A family farm that would endure for over 250 years had its start in the early years of the Plymouth Colony. If Richard & Ruth Taylor came back to life today they probably would be surprised to learn that the site of their humble beginnings in the early 1640s is now on the National Register of Historic Places and draws visitors from across the Cape and the country.

The original Taylor house was an “earthfast” (post in ground) hall and parlor house about 27′ by 18′ with an later 18th century addition. The hall, the larger room with the hearth, was the heart of home activity and the only heated space, while the smaller parlor was a reserved for adults. Children would have slept in the unfinished second floor.

The Taylors who lived in the house on this knoll were active in town and church affairs. The women raised large families while the men engaged in the kind of farming pursuits typical of the early years of Plymouth Colony. Richard Taylor even boasted about his plentiful corn crops according to oral tradition.

The Taylors were citizen soldiers. Richard Taylor Jr was active in the Plymouth Colony militia during King Philip’s War. During the Revolutionary War Rueben Taylor (1729 – 1785) saw militia duty at Fort Ticonderoga while his sons Samuel, Shubael and Hezekiah served in the state militia and/or the Massachusetts Line of the Continental Army. 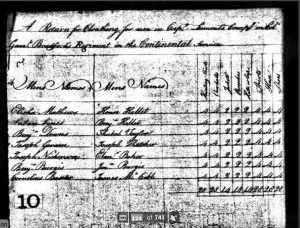 This Revolutionary War document from June 1777 shows an underage Shubal Taylor getting his new army uniform (“A return of clothing for the men of Capt Lamont’s company in Col Bradford’s Regiment in the Continental service”) a month after he enlisted for a three year term in the same regiment where his older brother Samuel was already serving as a sergeant. In 1776, prior to his service in Bradford’s regiment, Shubal at age 13 years and 8 months served in Boston for five months in Capt Micah Hamlen’s company, Col Thomas Marshall’s regiment in the Continental service, according to military records. It was not uncommon for underage boys to join the army in the patriotic cause, but Shubal’s extreme youth was quite unusual. Records show that he was a regular soldier and not the drummer boy often seen in a stereotypical drawing depicting America’s Revolutionary War armed forces.

Somewhere along the line, perhaps in the early 18th century, Taylor men probably began to earn a living from the sea although we have no written record of that. But we do know that two boys who grew up in this house became ship masters, one of whom was the focal point of a well-known local oral history tale for his heroics in a battle with the Barbary pirates.

Stories in the dirt …

Several archaeological surveys on the knoll starting in 2012 located the site of the original 17th century house and an 18th century addition along with a possible barn and some particulars about the farmyard layout. Many recovered household artifacts give us insight into the daily lives of these early Taylors who left behind little in the way of written memorabilia such as diaries or letters. The main house also featured an unusually large stone cellar probably added in the early 18th century perhaps reflective of the demands of a growing family or that the Taylors needed storage space because they were engaged in commercial trading of some sort.

Fortunately for archaeologists it was a common practice in the 17th & 18th centuries for folks to toss their trash into the yard thus creating a windfall for 21st century archaeologists working on the knoll. We collected an amazing array of colonial household items ranging from the practical and functional to more finer items reflective of a middle income colonial family. Among the artifacts were everyday redware vessels, finer ceramics made in England and sometimes Germany, clay tobacco pipes, gunflints, a musket ball, eating utensils, hand made nails, shoe buckles, cuff links, buttons and even a silver spur buckle. 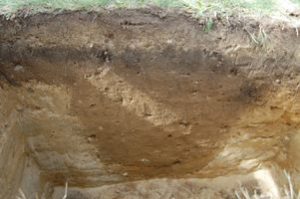 Native Americans and Richard Taylor apparently shared the same appreciation for the knoll location. Archaeological evidence shows that the front door of the original 17th century house was located just a few feet from where fieldwork in 2012 discovered a cache pit that Native peoples would have used to store foodstuffs like dried corn or nuts.

This inverted bell shaped, Native American storage pit was probably created not long before Richard Taylor chose this location for his farm. A cow bone and one glass shard were found in the fill of the 35 inch diameter, 33 inch deep pit dating it to sometime after Europeans started arriving on Cape Cod.