THE SWEEP OF TIME

“Taylor-Bray Farm is unique. I can’t think of another site like this.”

"I’m always treading ancient paths — walking atop other people’s stories … Who was here first? When? Why here?”

Ancient Taylor-Bray Farm is like a time machine revealing a kaleidoscope of images. Geologists see land shaped by the Laurentide Glacier 25,000 years ago. Archaeologists have a time horizon that stretches back 10,000 years to the evidence left  behind by Native peoples, the first humans to call this piece of Yarmouth home. Historians see an outlier farm begun in the 1640s by Richard & Ruth Taylor in one of the earliest towns of Plymouth Colony. Modern day visitors might imagine scenes from all those periods or perhaps just enjoy a summer picnic with a scenic view of Black Flats marsh or new spring lambs.

Close your eyes and use your imagination to travel back to any point in the farm’s ten thousand years of documented human history to envision what it was like for a nomadic Native hunter searching for game, or a 17th century Plymouth Colony settler trying to scratch out a living, or three teenage boys about to become Revolutionary War soldiers, two of whom would see action at the Battles of Saratoga and Monmouth, and endure the brutal winter of 1777-1778 at Valley Forge or a wife shouldering the burden of caring for a large family while her mariner husband went to sea for months at a time.

The Bray brothers move in … 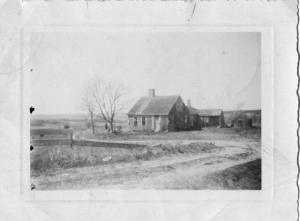 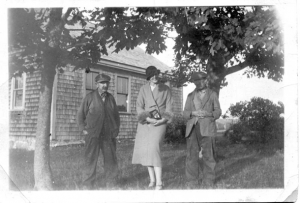 Seven generations of Taylors gave way to Brays in 1896 when Luther Taylor’s widow sold the farm to George & Willie Bray, bachelor brothers with long-standing roots in Yarmouth. The Yarmouth Register took note of this significant passage of ownership with a simple announcement: “George F. Bray and William F. Bray have purchased the old James Taylor homestead in Hockanom and are going to engage in farming there.” And they did just that for almost fifty years. 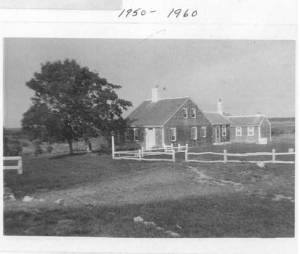 After George Bray’s death in 1941 the farm fell into a brief period of stagnation. By the late 1940s, today’s Samuel Taylor House had seen better days. But after the Williams family purchased the property, the house underwent major rehab work. Electricity and indoor plumbing were intalled for the first time. Deterioration was arrested while many of historic elements of the original half Cape and its two additions were preserved.

With the Williams family acquisition of the farm, new life was breathed  into it. From the then through the 1980s the Williams and Karras families kept the farming tradition alive.

The town of Yarmouth purchased the property in 1987 for “historic preservation and conservation purposes” thus saving the farm for future generations to enjoy and appreciate. Initially, however, little preservation or conservation was done with the farm.

Recognizing the need to protect the farm’s unique legacy and seeing its potential, a neighborhood group formed the non-profit Taylor-Bray Farm Preservation Association in 2001. Since then one of the oldest farming sites in the country has been run as a successful public-private partnership between the Town of Yarmouth and the Association. Generous funding from the town’s Community Preservation Grant Program has been a key to the farm’s 21st century revival.

A lot of human drama big and small has played itself out this small fragment of land in a 21st century residential neighborhood. Uncovering the farm’s history is still very much a work in progress as archaeologists and local historians work to fill gaps in our knowledge and contend with the vagaries of fragmentary evidence. The farm still has secrets to give up, but a story is emerging that connects to America’s past by illuminating the daily lives of ordinary people who from time to time got caught up in historic events.